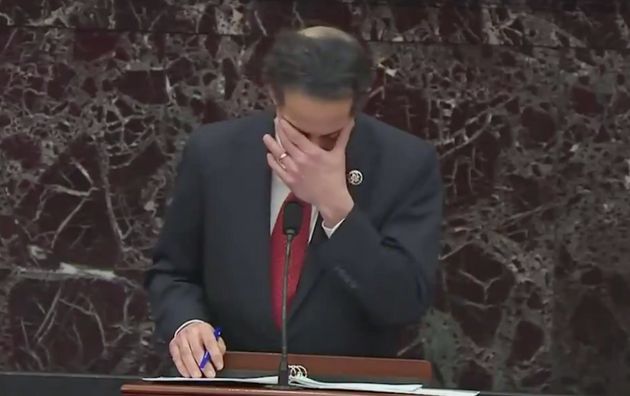 Reliving the murderous assault on Capitol Hill shook some of the Democrats at the opening of the proceedings against Donald Trump.

UNITED STATES – Democratic prosecutors brought back to America the violence on Capitol Hill on Tuesday, February 9, on a very emotional first day for the impeachment trial of Donald Trump .

The elected officials appeared from the first minutes of the procedure decided to remind the 100 senators who serve as jurors, but also to the citizens who can follow everything live on television, the violence of this day of January 6 which took place. resulted in several deaths and will go down in history.

In opening their indictment, the Democrats released a long shocking video, putting into perspective footage leading up to the bloody attack, as you can see below .

We first see Donald Trump’s speech calling on his thousands of supporters to demonstrate towards the Capitol, seat of Congress. “You will never take back our country by being weak,” he said to the white-hot crowd. Then the parliamentary sessions to certify the victory of his rival in the presidential election Joe Biden.

Then came the images of protesters breaking into Capitol Hill, walking its halls while elected officials, and Vice President Mike Pence were evacuated from the Senate where they were hiding in the galleries of the House of Representatives. The clip ends notably with shots of the crowd in which demonstrators can be heard talking about weapons for “next time”.

If these facts, “concrete and solid”, are “not liable to impeachment proceedings, then nothing is,” concluded MP Jamie Raskin, the leader of the Democratic “prosecutors”.

Accused of “inciting an insurgency”, Donald Trump was guilty of “a frightful constitutional offense”, he then launched in the same chamber of the Senate where the pro-Trump demonstrators had rushed the day of the certification of the results of the presidential election.

The latter quickly had tears in his eyes as he recounted being there with his daughter, just days after the death of his son, as you can see below.

This trial, a “political instrumentalisation”, will “tear up” the United States, retorted a lawyer for the 45th president, David Schoen. Because “many Americans see it for what it is: an attempt by a group of politicians to remove Donald Trump from political life”.

Behind this intention, the “fear” that the Americans will re-elect him in 2024, affirmed his other lawyer, Bruce Castor, who then drew much criticism from both camps for his performance.

At the exit of the hemicycle, the Democrats did not hesitate to ironize. “I will reread the transcript to see if I can find a coherent passage,” said Senator Richard Blumenthal. “The arguments of the defense were weak and convoluted, to say the least,” added the elected representative of the House of Representatives Adam Schiff on Twitter, where Internet users were also unleashed against the lawyer, one of them wondering if he had graduated “from a chewing gum dispenser”.

According to two anonymous sources cited by CNN, Donald Trump himself was on the verge of shouting while listening to him. His colleague, Senator Lisa Murkowski, said “appalled”: “I don’t see where he was going”. Not destabilized by these criticisms, Bruce Castor told the press that “the day had been good” and that he “would not change anything” during the next hearings.

But regardless, the trial seems to be over in advance: a two-thirds majority, which seems all the more unattainable after a 1st vote which gathered the support of 44 out of 50 Republicans, being necessary for a guilty verdict. Continuation of the procedure this Wednesday at noon (6 p.m. in France), with the statement of facts, each party having sixteen hours.

Jimmy Curd is a features editor at iPress USA, where He oversees The Broadsheet newsletter and edits the publication’s long-form storytelling, as well as its coverage of gender and business.